How Dangerous is Datura & Is it Poisonous? 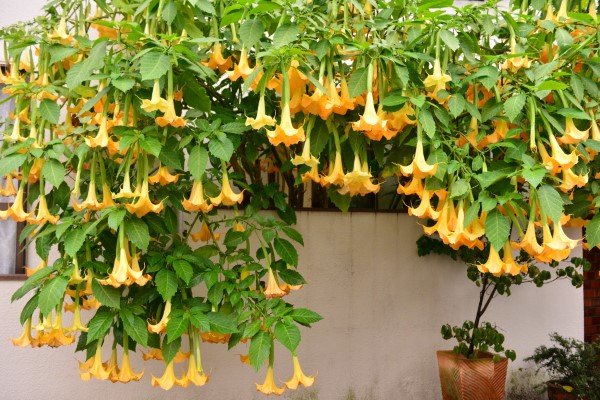 Datura is a flowering plant often used in ornamental gardens for the beautiful pastel trumpet-shaped flowers it produces. Datura is the genus with between nine and twelve species under its umbrella. As part of the nightshade family, it has been part of religious and cultural rituals for thousands of years, especially in ancient Chinese medicine. The plants grow to about three feet tall all over the world in tropical and moderate climates. Datura seeds develop inside a capsule covered in spines; as it ripens, it splits open and distributes the sees onto the ground.

Also known as Jimson Weed, moonflower, devil’s weed, or thornapple, Datura is a poisonous plant that is unfortunately often abused in recreational use because it produces hallucinations and intoxication that can last for days. Users may ingest the Datura, smoke it, or use it as a lotion on the skin. Sadly, many people die of Datura overdoses because it is so easy to misjudge how much of the drug you’re taking. As little as 15 grams of Datura, which is between 15 and 25 seeds, can be a fatal dose. The side effects on the body can last long after the “high” wears off.

Three chemicals, hyoscyamine, atropine, and scopolamine, give Datura its intoxicating and medicinal properties.

When these three chemicals are used separately under the supervision of a medical professional, side effects are controlled, and the drugs are generally safe. However, when used in combination as in Daturas, they are very dangerous and easy to overdose. The signs of an overdose include an inability to tell reality from fantasy, high body temperature, tachycardia, violent behavior, and pupil dilation.

What Are Some of the Effects of Datura?

Datura has a variety of physical effects on the human body. Here are a few, but there are many more.

Mentally, Datura can cause amnesia, confusion, psychosis, and hallucinations, in addition to altering mood and emotional expression. If a person takes too much Datura but not enough to overdose, the consumer may still experience something similar to a hangover as the drug metabolizes. The individual may feel some anxiety, dehydration, sleepiness, and light sensitivity, as well as other symptoms.

Treating overdose usually involves using activated charcoal to prevent absorption of the drugs and intravenous physostigmine to cross the blood-brain barrier and calm aggravated receptors. However, this antidote cannot be administered to those with heart problems and may only work temporarily, which is another reason that Datura overdose is so dangerous.

How Can I Learn More About Datura?

If you would like to learn more about Datura, contact us at MHS for an appointment. We can help if you or someone you love is struggling with an addiction to Datura or a related derivative. People who use Datura may also be using other harmful substances, so overcoming a Datura addiction should be done under appropriate medical supervision. At MHS, we work with individuals and groups from adolescence to adulthood in both educational and treatment programs.